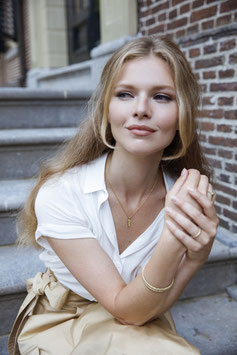 The slave bracelet became popular in the Netherlands in the 1950s, which came over as a trend from abroad. It was typically a piece of jewelry to give to your fiance. So she was symbolically chained to her future husband.

Due to the typical rough finish of the solid collection, this modern classic seems petrified in time